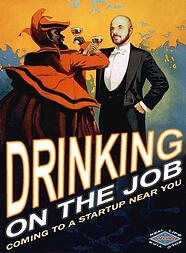 When you, Mr. Owner, hired a bartender or manager, did you include the consumption of beverage alcohol as part of the job?  Of course you didn’t.  So why would you allow it?   If a bartender or manager chooses to consume a bever age alcohol product for their personal consumption while working, they’re stealing from you!  It’s grounds for immediate termination.  It’s no different than working at Wal-Mart and helping yourself to a few DVDs or a pack of gum and not paying for it.  It’s called “shoplifting” and people go to jail for stealing company property. I have too many bartender friends who got into the habit of having a couple of drinks while working.  The customer buys the bartender a drink, and the bartender gladly accepts.  Now the bartender is up to “quite a few” every day.  Then the bar tender nds himself “having to have a few” on their days off.  Then they have to have several drinks a day just to “balance out.”