Get your “Rocks " Off!! Drink Recipes

Get your “Rocks ” off with  the Black Russian, Old Fashio 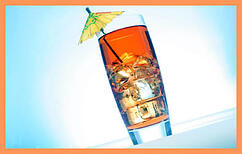 In this part of our series on contemporary drink making, bar management expert Bob Johnson examines  some of the most popular “Collins”  glass drinks  including the Long Island Ice Tea,  the Tom Collins and everybody’s favourite hangover cure, the Bloody Mary.

Collins” glasses are usually 12-16 ounces, and these glasses can be used for a variety of drinks.  Here are some of the more popular drinks served in a Collins glass.

Customers who order Long Islands need to be carefully watched.  How fast are they drinking the Ice Tea?  How long between re-orders? The traditional recipe for the Long Island Ice Tea is:

Collins glass  filled with ice; 1/2 shot of Vodka,Gin, Rum, and Triple Sec; Sweet and Sour mix to 4/5 of the glass; add coke to the top; shake; garnish with a lemon wedge/straw.

There are many variations, including:

(1)  Use Tequila in the recipe.  Many Midwestern bartenders will tell you that a Long Island Tea with Tequila is a “Texas Tea.”

It’s cheaper ($3-4 per bottle) as compared to the Triple Sec that contains alcohol ($7-9 per bottle).  Triple Sec is nothing more than a  flavouring agent. When mixed with other liquors and ingredients, the presence of alcohol in Triple Sec is meaningless.  All we care about as mixologists is the orange flavour we get from using Triple Sec.  Triple Sec is the domestic substitute for Cointreau.

(4)  Use 7-Up (not Sprite) and cranberry juice instead of Coke and it’s now a “Long Beach Tea.” Also, if you’re measuring 1/2 ounce shots, use the small side of the jigger (3/4 oz.) and pour below the top of the jigger.  Put in 1/2 shots of Vodka, Gin, Rum, Triple Sec into small side of the jigger.  Or simply have your bartenders “free pour” 1/2 ounce of liquor one at a time directly into the glass. Bartenders who pick up and pour the four bottles at the same time make the drink wrong. Usually more of one liquor comes out. Great “show,” but a lousy drink. Instead, consider premixing the four liquors into a separate container along with the sweet and sour mix if you get a lot of calls for this drink.  If you’re high volume, your bartenders could save valuable time by-passing the steps of picking up each of the four liquor bottles.  De nightly pre-mix the liquor for the service bartenders.

Next Up Vodka Collins…..